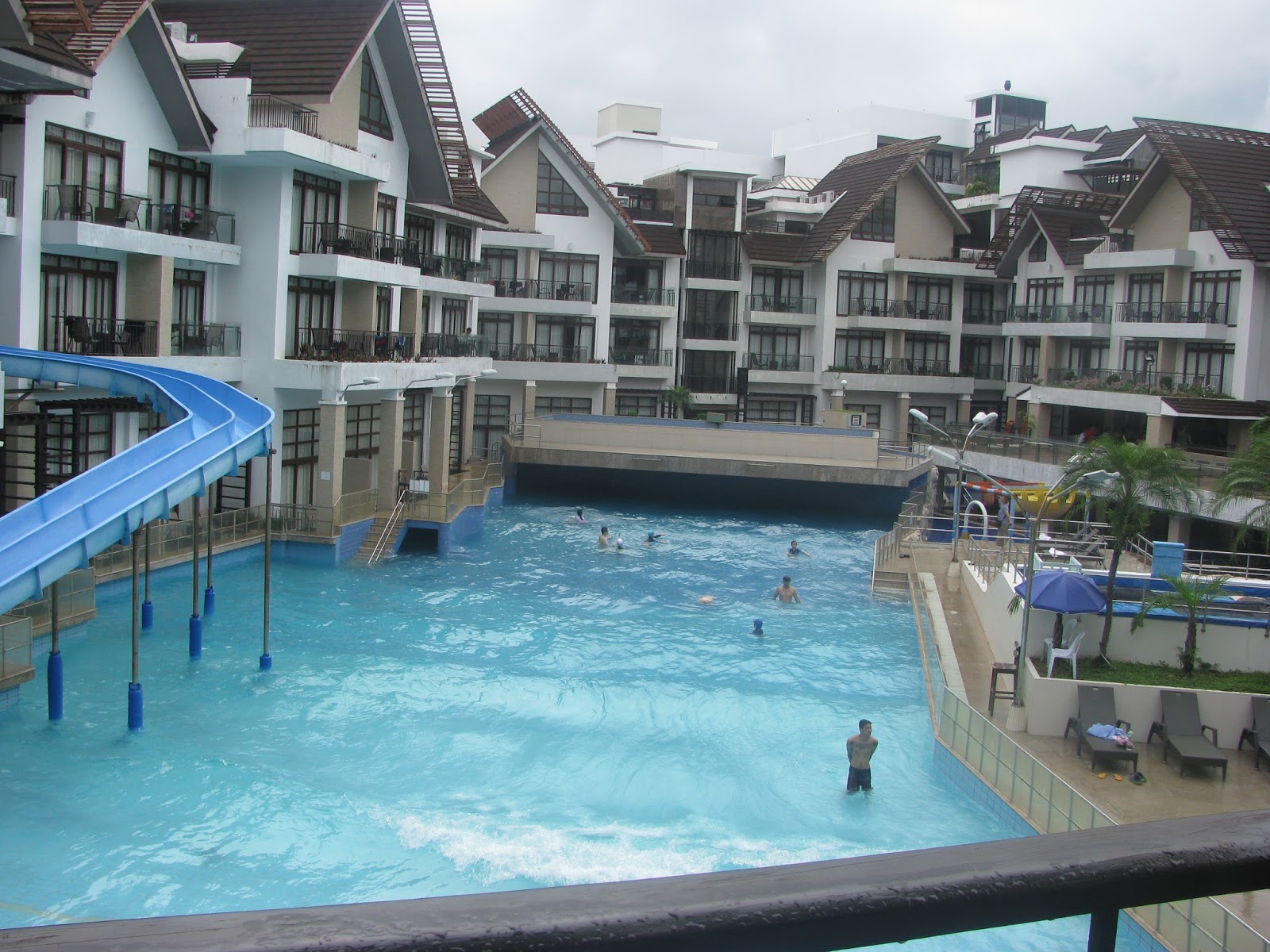 Uhhmm, my 3 week-holiday is over and now back on my desk in Sydney. The 3 weeks went pretty fast, too fast to gain weight from all those hotel buffet breakfasts. It also covered 2 important holidays (Christmas and New Year) where feasting was the whole idea and fasting was not encouraged, at least in my family tradition. More importantly, it was spent with family and friends so merrimint was in the air no negativity allowed. We flew in via Cebu Pacific and had a connecting flight to Cebu. Spent 4 nights in my old queen city of the south where I saw my young generation of family (hello nieces and nephews) and bonded well with my dear friends. We then flew to Boracay for another 3 nights in which I decided to write a blog first (Cebu next) only because I have all the pictures needed 🙂 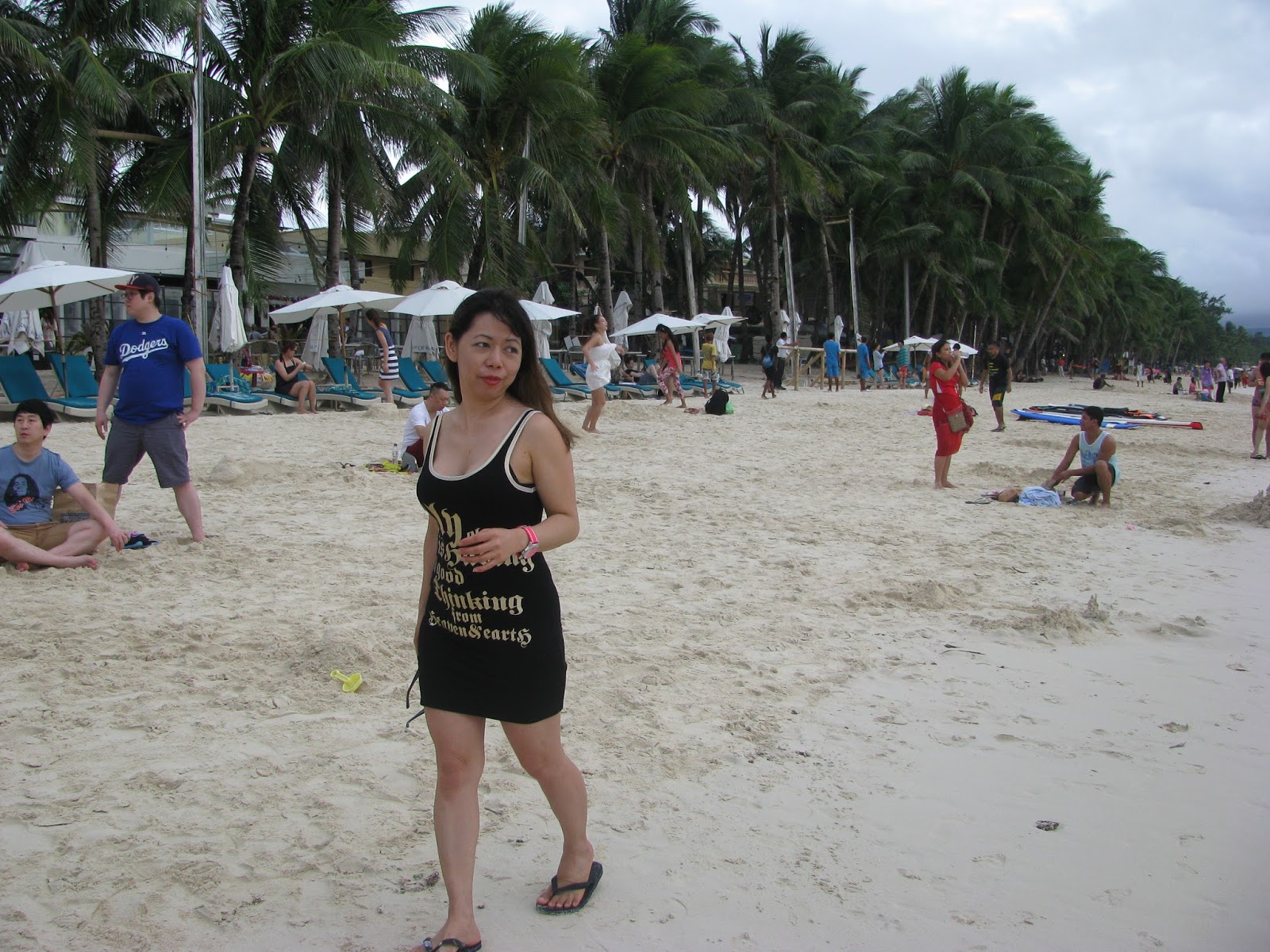 It’s my first time in Boracay, the beach capital. I know, why did I ever miss this popular spot of the country. An arranged transfer is necessary when visiting Boracay since you need a car lift from the airport to the port, then a boat to the island and another car to the hotel. But it is a short 3-transpo-ride I promise. We decided to stay in Station 2 where the hot spots are and the party never ends 🙂 True indeed, the restos were everywhere, convenience stores and little shops were just around the corner from Crowne Regency Hotel and Convention Centre where we stayed. Our first dinner was in Dos Mestizos which was a Spanish restaurant where we almost backed out because of its dark lighting inside (hey, I have to be in a bright lighting for the kids :)) But upon tasting their family size Ceasar salad, we were sold. It’s followed by tapas, paella and sangria, we’re glad we stayed. On the next day, we went to D’Mall which was in the heart of Station 2 to look for breakfast opportunities haha and some little shopping. Ended up having breakfast in Pancake House where we tasted the nicest hot chocolate on the island. We proceeded to the beach for the first time and found ourselves among with the other hundreds of beach bums lazing around and sipping coconut water in the actual coconut shell 🙂 It was very hard taking photos without photo bombers as it was just crowded. Nevertheless, we had fun even if everything was for sale including building sandcastles with your name in it. No joke, there were resident kids who offered to build a personalised sandcastle for just 50 pesos. Why not, they said it was for their school lunch on the following day 🙁 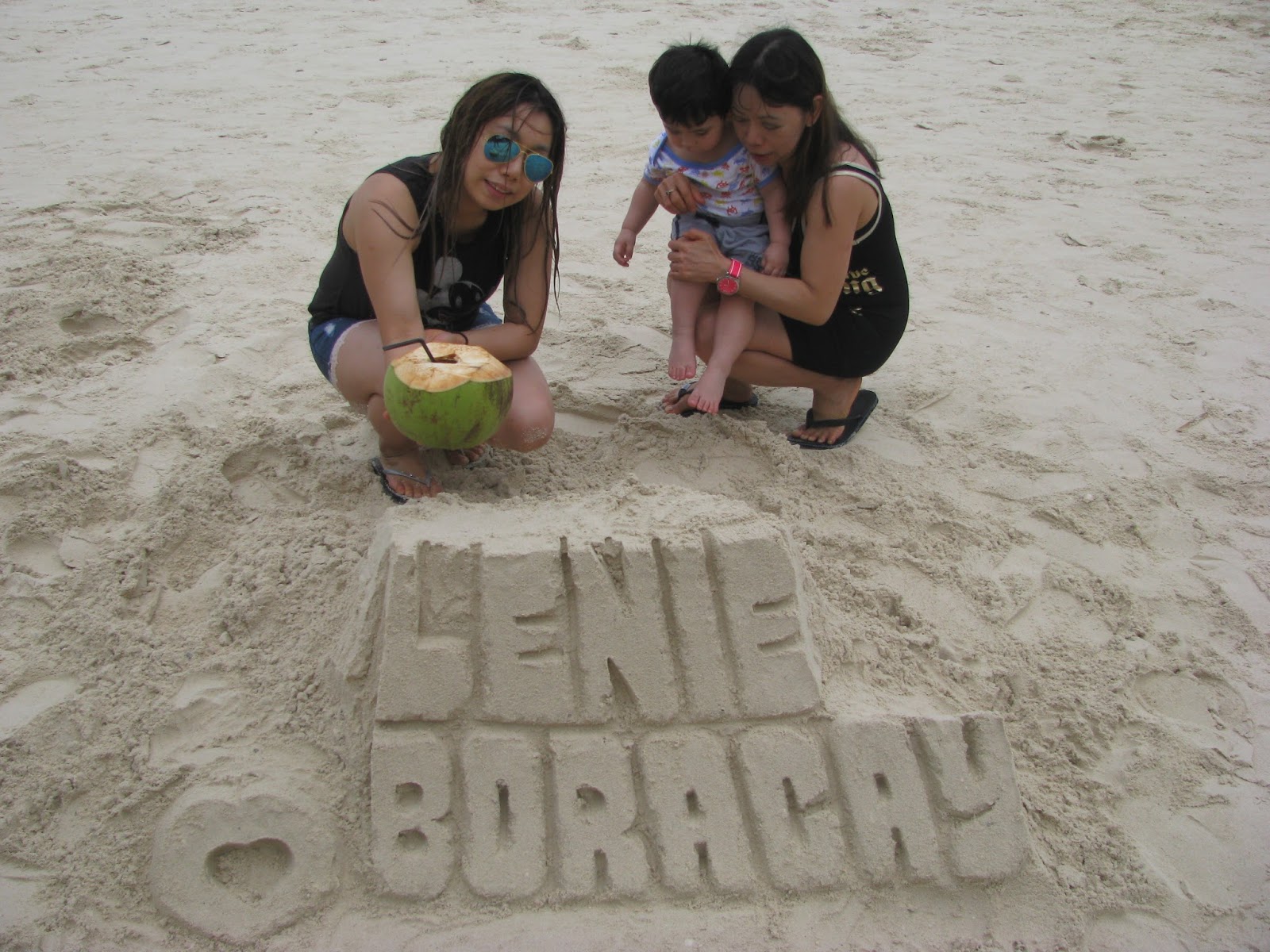 water flosser helps you clean your tongue smoothly and restore oral hygiene or taste sensation. You can now use best-water-flosser to enjoy better deep cleaning.

The next day was a different story as we decided to be more adventurous. Hubby and the boys went ahead to do adrenalin rides like the ATV and Buggy car while the girls and the kids proceeded to Station 3 and waited for the boys for the Banana Boat and Helmet Diving. Walking from Station 2 to 3 was not really hard considering I had a baby in my arms as I was distracted with several vendors trying to sell everything from clear plastic cases for mobile phones to souvenirs. No matter how many people buzzing on the beach front, the beach still held a majestic beauty because of the contrasting colours of the powdery white sand and turquoise blue and green water. Even though the sky was grey because of the storm in the nearby islands yet it didn’t rain much, in fact, it had given us a cooler breeze preventing us from getting sunburn. Station 3 had lesser vendors but it is a docking area for boats taking people for island hopping, diving and parasailing. 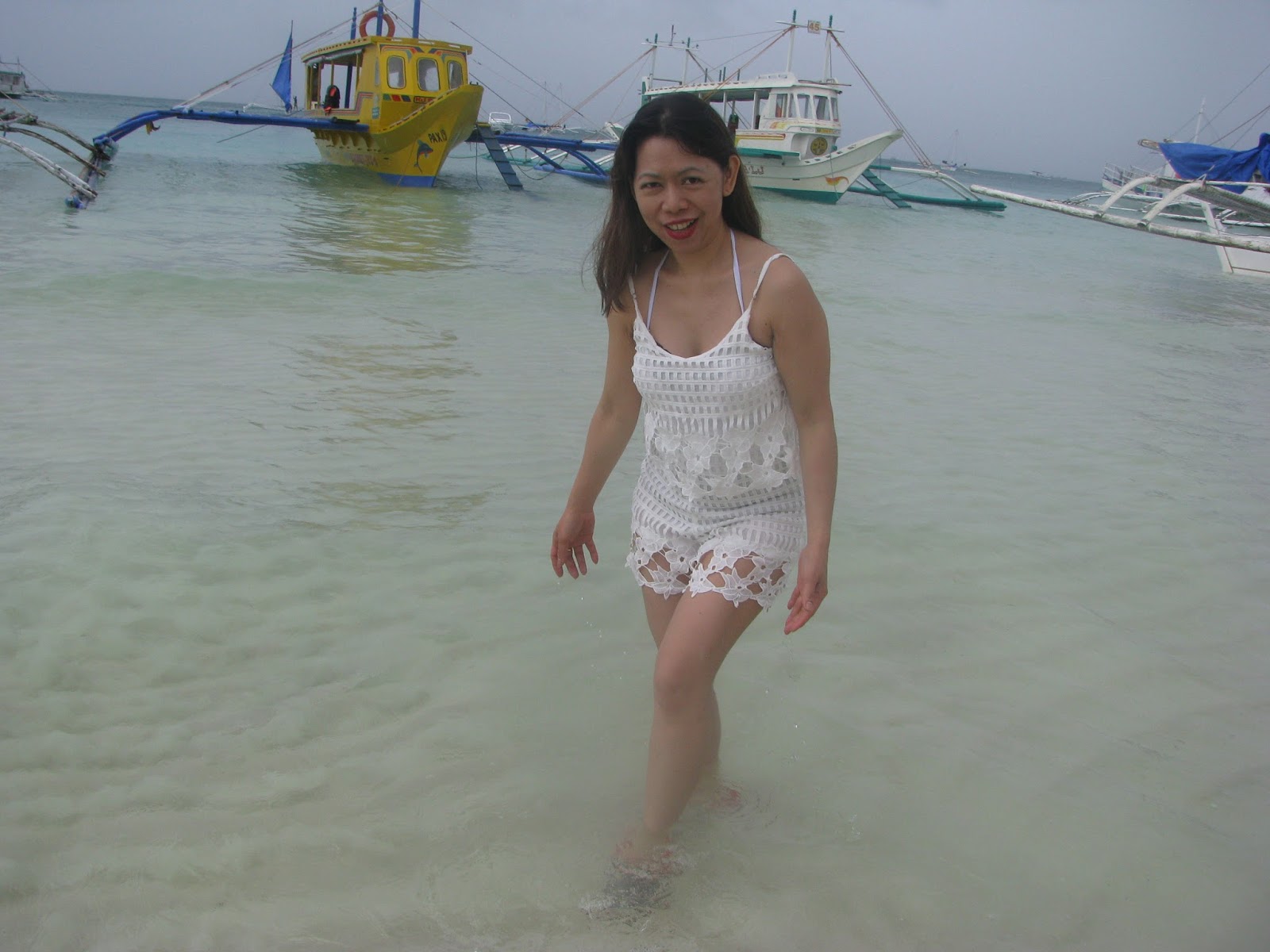 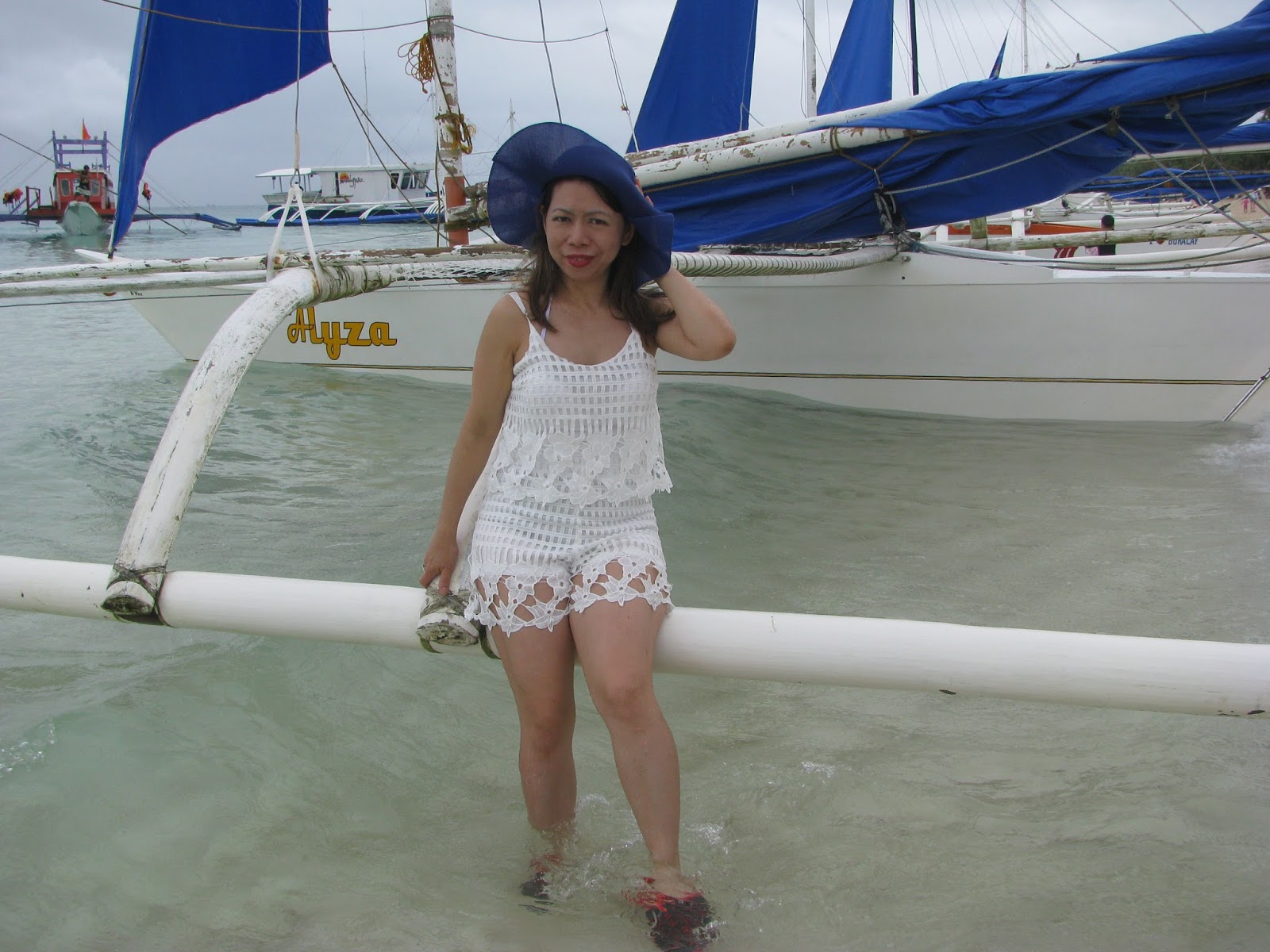 I reckon the Banana boat ride and Helmet Diving were the highlights of my Boracay trip. The Banana boat was only 20 mins but it was as thrilling as it can be as we were tugged by a superfast speedboat. As long as you will hold on to the rope and maintain your balance you will be fine no matter how much zigzagging the speedboat does in the middle of the sea. 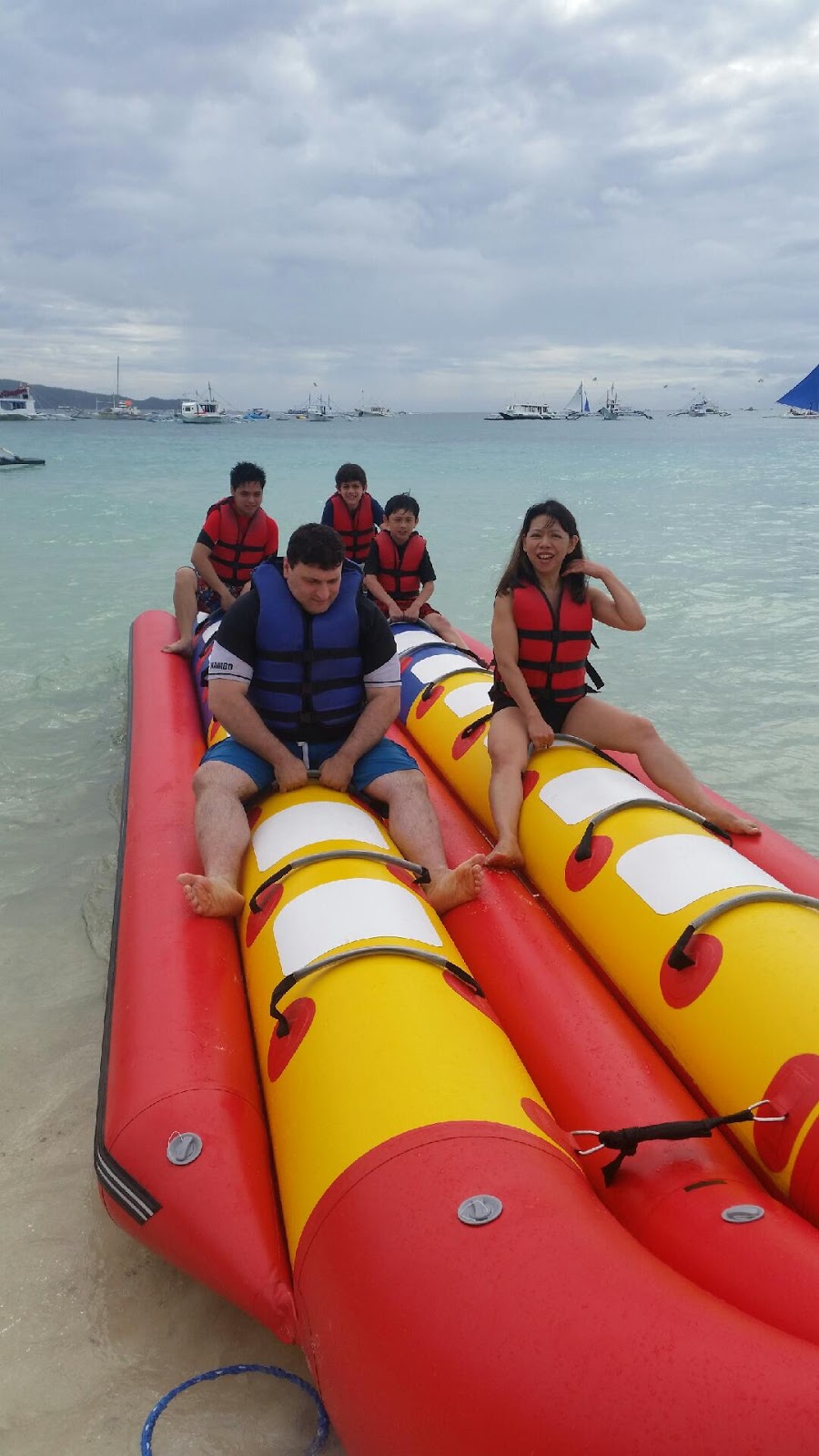 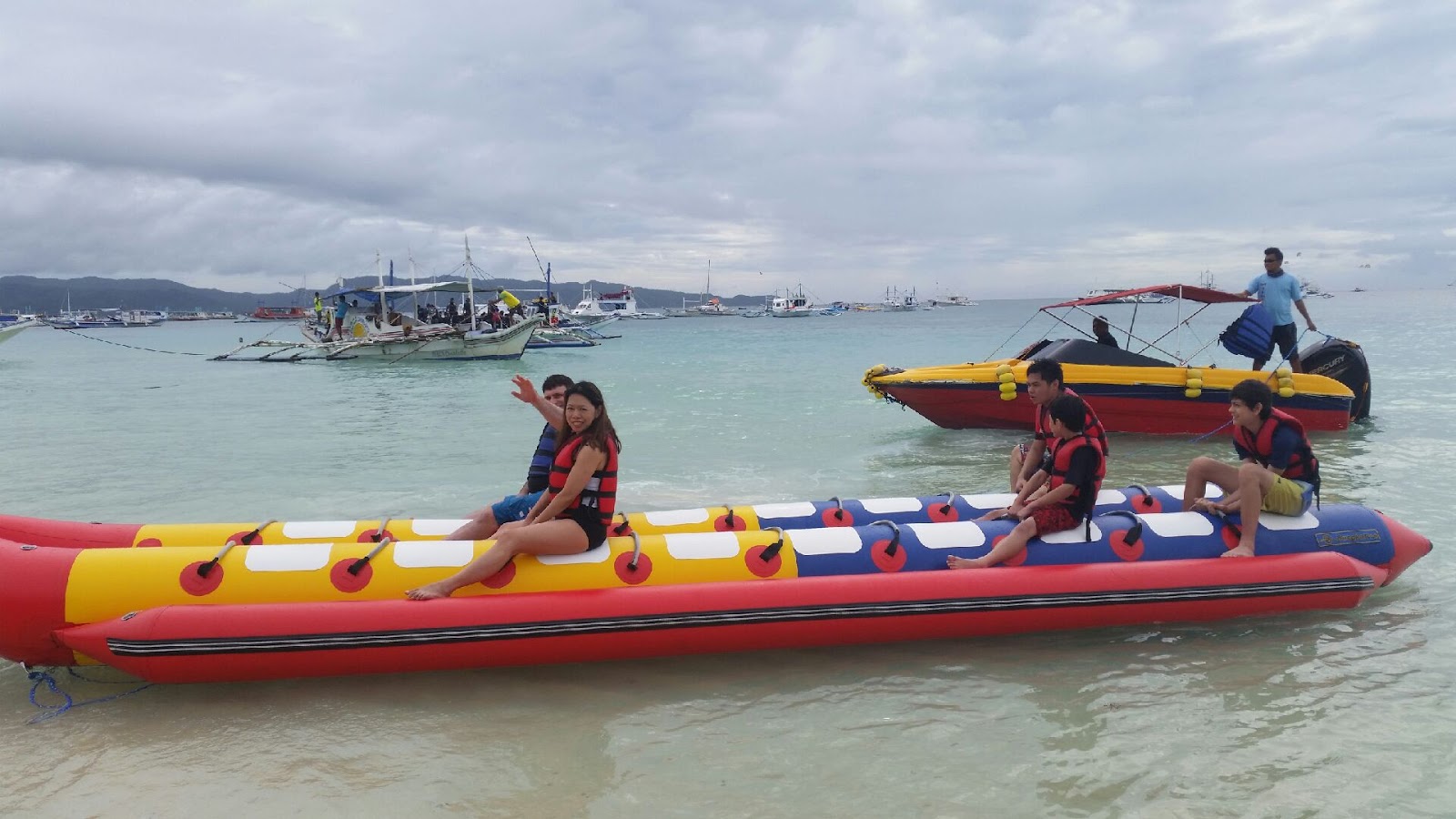 As for the Helmet diving, we were also taken by a speedboat to a platform stationed in the deeper part where we were briefed on what to do. The diving was only 15 minutes but it was an amazing 15 minutes that I will never forget. The helmet was a bit heavy as you go about 10 feet all the way down to the sea floor. I was really scared that I won’t be able to breathe but I had to stand up for the girls’ side because my 2 sisters went back up and chickened out as they were lowered by the divers. So it’s only me and my niece who got the bravery award haha. We were rewarded indeed by the underwater spectacular view of the corals, sand and colourful fishes. It was overwhelming to walk on the seabed and feel the fishes attacking the bread that I was holding. The GoPro that we bought in Cebu came in handy for this adventure although the diving company also handed us a CD full of our pictures underwater. 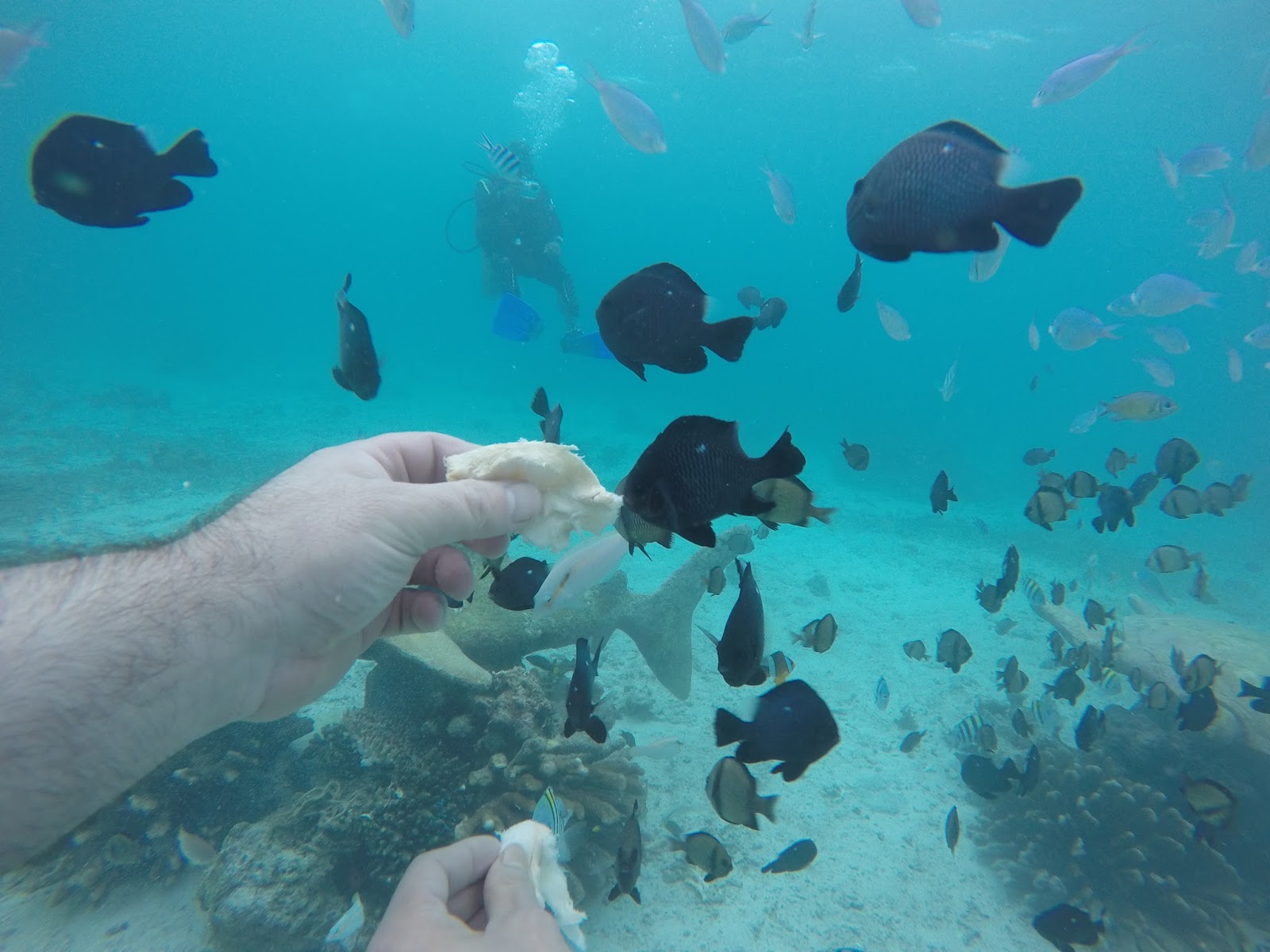 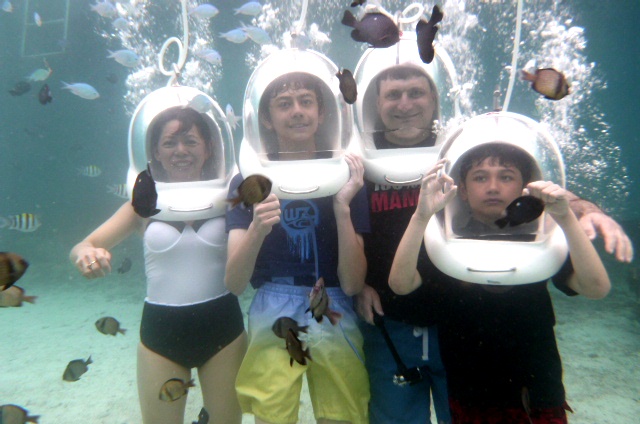 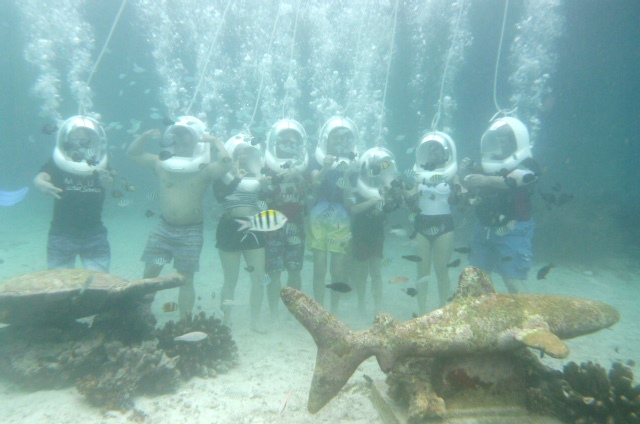 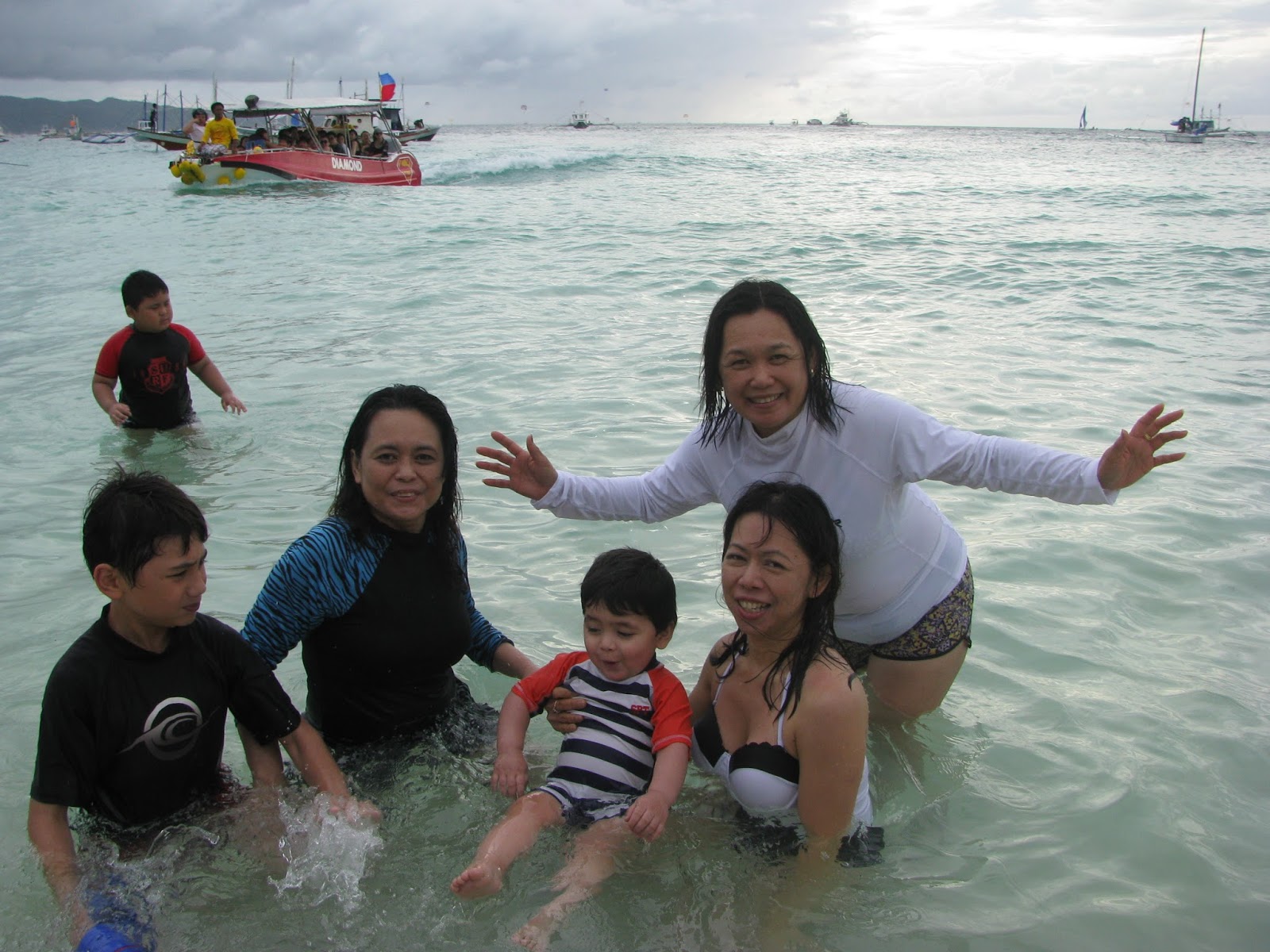 For our last dinner we went to Obama Grill in Station 1 and enjoyed a scrumptious seafood dishes. The food and the quietness in Station 1 made me reconsider coming back to the island as it is a different side of Boracay, a nicer side that I should have explored more 🙂

The Lord makes firm the steps of the one who delights in him; 24 though he may stumble, he will not fall, for the Lord upholds him with his hand. -Psalm 37:23-24

When in Las Vegas